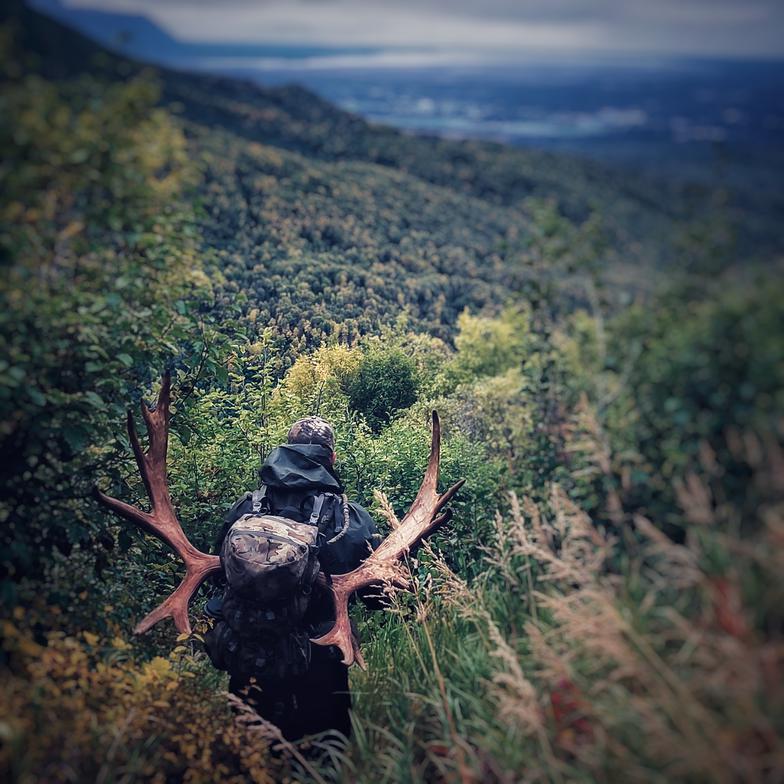 Recently I was asked to go on a combination moose hunt and sightseeing excursion to Palmer Alaska. The moose hunt would require hard four wheel ATV travel for 3 miles and difficult hiking for 3 miles to a hunting camp. We would be required to carry everything we need.  That included shelter, water filters, food, clothing and hunting gear. We could be required to shoot and potentially stalk a 1500–2000 pound animal. We would then have to field dress it, and pack the meat and our equipment out. Tuhon Harley Elmore, who invited Lisa and I, described it as very difficult. He had been years previous and while the trips were worthwhile challenges, they had not yet killed a moose.  He invited us and then said,” if you come, be ready.”

I speak regularly about the need to challenge ourselves. I talk about the forging power of hardship. I also bring up how shared hardship builds bonds.  I couldn’t say no.

It is one thing to prepare for an event that might happen. It is another thing altogether to prepare for something with a date. It is like saying “I will get married someday” versus saying “I will get married on June 19th.” The intensity difference between “I might want to take a Muay Thai match” and “I fight on November 12th” is orders of magnitude.  When you place a challenge and a date on an event such as this, it becomes real.

This trip of around one week was amazing. Alaska is a magnificent place to see. The scale of it amazes. That mountain “over there about 500 yards” turns out to be miles away. Things that are normally easy take much more effort because of the isolation of much of the state.  It really is like living in a different country.  In one of the native tongues, Alaska means “Great Land.”  That is not an overstatement.

After a long flight, our team of hunters came together. The team was made of some of Tuhon Harley’s longtime friends.  Most of our spouses came to sightsee during our journey and afterward. The hunters were Tuhon Harley, Greg Macpherson, Bobby Nash and me.  Although I grew up in the country, I was the least capable hunter of the group.  We loaded up mid-morning and headed up the mountain.

Our friend and host, Jonathan Jester, had gotten hurt seriously 2 weeks prior to our trip. This meant he could not do much of the preparation that he had done for the group in years past.   He said that the four wheeler portion was the only part that he was concerned with.

Jonathan is so much of an optimist he makes me look like Debbie Downer.

The four wheeler trip up the mountain was challenging. Two men were riding on each four wheeler. Often the passenger would have to dismount in order for the driver to get up the very steep hill or through mud that was of uncertain depth. This portion of the trip was 3 miles.

The next part was the hike. All of us tried to limit the weight of our packs to 40 lbs. I don’t think any of us made that goal. The terrain was like a 70-degree incline in many spots. The trails were like a 50 yard steep river bank. They were composed of slick black mud and silt. Sometimes you would just slide down 5 feet when we had just made it up 4 feet. We started talking about it as if we were running sprints. “Just make it to the next light pole.” “Just make it to the next mailbox.” We would make our next objective and rest some. It was a very demanding hike.

Camping is not hunting. Hunting is not camping. We made a hunters camp. It was not designed for comfort. It was designed to keep us comfortable enough to hunt effectively.

Water was a 30 minute walk down a mountain, 30 minutes of pumping from a mossy bog and 30 minutes walking up the mountain.

If you didn’t have the right gear, the right preparation and the right mindset, the first night could have driven you off. Hard rain, temperatures in the 30s and over 20 mile per hour winds on a mountain top in bear country can keep an Oklahoma boy awake. There were some laughs that first night as Tuhon asks me, “what do you think of this?” We both started laughing.

The next day we struggled to get on the hunt before dawn. Hunting is not a team sport but when a member of your team shoots a moose within two hours of setting up, cleaning, and moving that moose is a team activity.  At least for us.

A 1500 pound animal yields 500 pounds of meat after 2 days of skinning, and field dressing the animal. This meat (and its component parts) had to be moved from the site of the kill to an area that was safer from bears but not on top of our camp.

The site of the kill was 600 yards or so in as the crow flies but 1.5 miles of walking up and down hills through scrub brush.   So out and back several times for supplies as well as to carry 80-100 pounds of meat to this staging area.

In the two days after we got the moose, there was a time for each of us when we thought we had met our limit.  We would look at the group.  That look would reset us.  It would bolster our hearts.

There were some incredible stories about the trip that I can tell.  We were met with challenges at every turn. The more important part, at least for me, is the remarkable men I went with and the bonds that this trip built.

At one of the most critical parts of the trip, Tuhon Harley asked me what I felt like.  I said “If none of us go the hospital, this is still an amazing adventure.”  And it was.