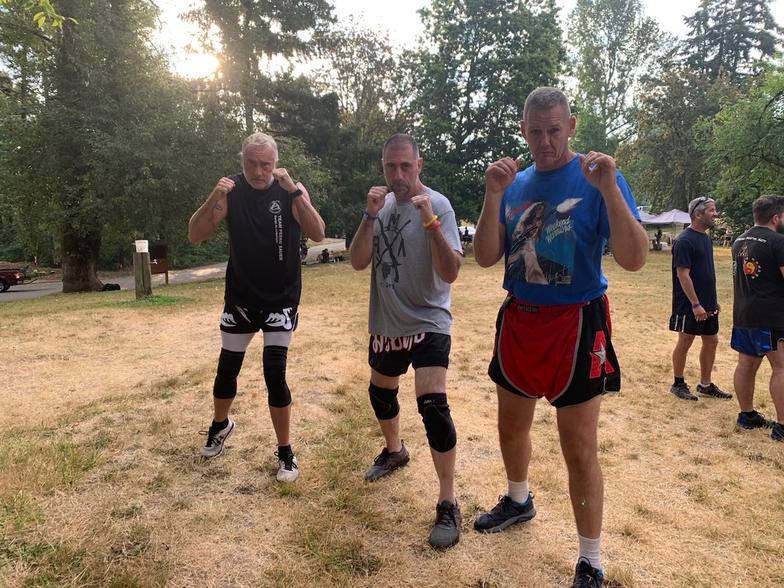 For the last 30 years, the World Thai boxing Oregon Camp is held in the temperate forests of Oregon. I spoke with several people including Ajarn Chai, the grandmaster of the WTBA, who said it could be the last year of the camp. I wanted to go.  I felt I needed to go. So I made plans and sacrifices and went. I was fortunate enough to be able to stay with Guro Jessica and the PRIDE crew from OKC.

This year it was outside of Canby, Oregon.  This is a beautiful suburb south of Portland. You drive through rolling hills and past flowing rivers as you arrive at Molalla River State Park.

The Pacific Northwest is suffering a heatwave this year. 90-100+ temperatures were the average.  A lot of battling heat cramps and dehydration this year. This is not the norm.

The camp itself is set up by the WTBA members in Portland, run by Ajarn Jeremy Wijers. It transforms the camp from an everyday state park to a setup similar to what you might see in Thailand. Heavy Bags are hung on temporary structures and shelters are setup with picnic tables.

A day of camp begins at 0730 with a warmup and run. Then a combo is generally taught. Ajarn Brian Popejoy would work with us on footwork. Basic footwork. Experts and Champions are people who perform the basics automatically and at a high level so they can think about strategy. We might do a rotation of stations at this time. That would mean breaking into groups of 20 as there were 150+ Nak Muay there.  They came from as far away as Australia and Canada and Mexico!

This would be supplemented with the whole group getting together with clinch sparring in groups of three, or long knee walking up a hill.

Breakfast at 1030-1100 gave us a chance to rest.  Then a boxing section with Ajarn Leonard Trigg. He has so much knowledge about the sport of boxing and its application that it is amazing. Then another rotation. Lunch break and then another rotation. Dinner would end the day around 7:30 or 8’o clock.

Sometimes we would only do seven stations. At other camps we would do multiple rotations. The heat at this camp made that dangerous. We had several with deep muscle cramps, myself included, but no one that I know of left for heat exhaustion.

There were so many lessons I got out of this camp. Here are a few that stood out to me:

The benefit in working a small group of things.

Our combos had the same techniques and sequence but would change depending on what initiated. One time it would be our kick that started the sequence. The next it would be the opponent’s kick that started the sequence. Changes were incremental to allow us to remember the combo. This allowed us to play with the timing and avoid “boredom” but still get many reps. Being able to apply a few skills in as broad a variety of circumstances as possible is a great attribute to have on many levels.

Benefit in having specific objectives: Be Healthy, Train Smart, Be Healthy

Ajarn Justin Markus, who is a part of Living Muay Thai, would ask if you were early to his station a question. “What is your objective?” Being specific about what you want from a training session, a martial art or relationship can greatly improve how you interaction. Having fun can be a goal. Will that goal help you get better?   Do you want to get better?

My objective became, ”Be Healthy. Train Smart. Be Healthy.”  Every session I wanted to focus on what I could do to be healthy. That sometimes meant taking a break. It meant getting hydration. It meant hitting hard enough to meet the instructors’ objectives but not hard enough to injure myself. As a martial artist in my 50s who is “somewhat” competitive I tried not to compete against the 20 year old guy doing elite competitive Muay Thai. This objective was passed on to several who needed to get through the week to test. It could be the thing you need to keep training.

The power of multiple experts pouring into you

There were so many people that had expertise in so many fields. Not just different aspects of Muay Thai, but whole different arts. Everyone that taught (and many different training partners) poured as much as they could into everyone. They also had the humility to say “That’s not me. He’s the man you want to talk to.”

We only have so much time with friends, instructors and family

Ajarn Chai announced that this is probably his last camp. This breaks my heart. This event will probably go on. The Godfather of American Muay Thai just may not be physically present. He may come by. He may Zoom in. But he probably won’t be there.

We only have so much time with friends, instructors and family. We all move on. One way or another, we all stop interacting with each other.

Love and live this moment. Cherish the time with friends, instructors and family. If you are lucky, some people are all three.